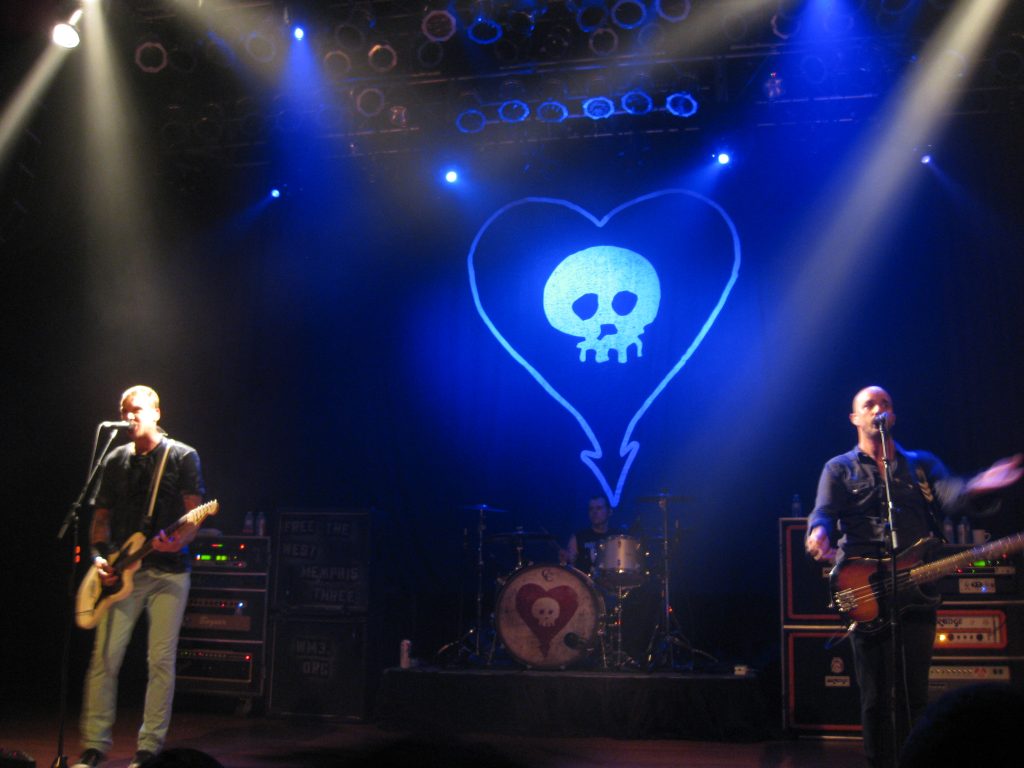 Alkaline Trio is an American punk rock band from McHenry, Illinois. Formed in 1996 by then bike messenger Matt Skibba and Glenn Porter. A couple of lineup changes early on in the bands career with Skibba being the only original member from the bands formation remaining.

Dan Andriano joined on bass/vocals in 1997 and Derek Grant on drums in 2001 which cemented the lineup which has remained consistent ever since.

Alkaline Trio for me began back in 1999 when I heard “Nose Over Tail” on an online radio station, I thought it was fantastic! It was unlike other so called punk music that was taking over at the time. It was loud and in your face, frantic with a hardcore punk aesthetic. I obtained the song and I only had that 1 song until I next heard from the Band. I was too preoccupied with other bands at the time to have room for anymore.

Next time I heard from them was on MTV in the form of “Stupid Kid” in 2001, then followed “Private Eye”. This put a face to the band and I was drawn in. I immediately went out and bought the CD and listened to it till I wore it out. After wearing it out and not wanting to listen to it anymore I started digging to see if the band had anymore music and was I in for a treat!

While there’s a good chance many people out there would come up with a list 60-70% similar to mine there’s little chance it could be identical. If you see an identical list that isn’t giving credit back to this site let me know! There’s no copy/pasting of other people’s lists here! I create these from my own years worth of experience of listening to these bands. In the case of Alkaline trio that is 20 years. 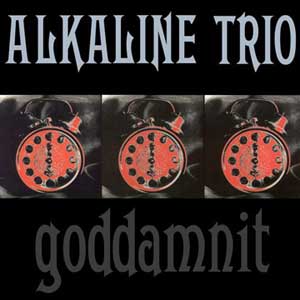 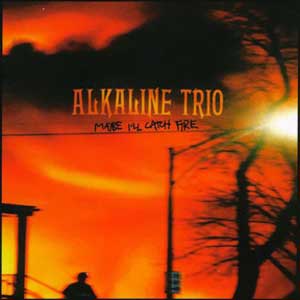 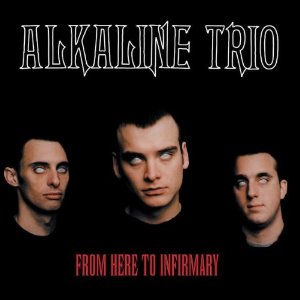 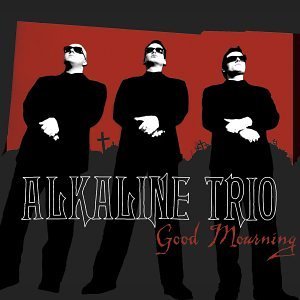 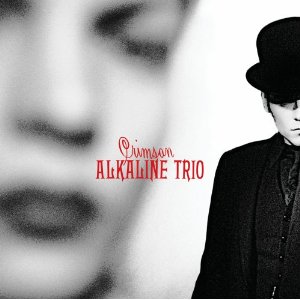 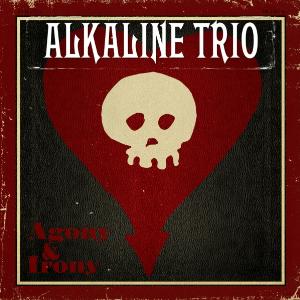 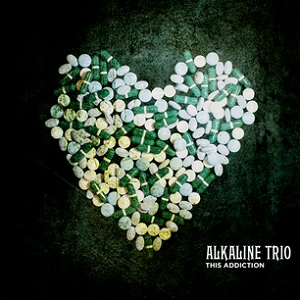 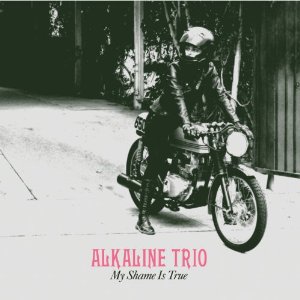 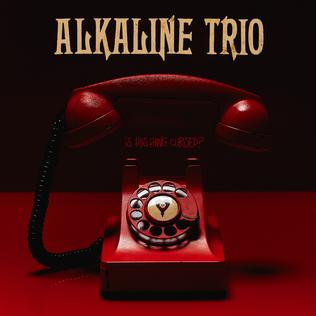 So many good songs on their Debut. For the most part the songs all follow the same loud frantic formula with catchy hooks and melodic outros. There’s 2 acoustic tracks on here which breaks up the album nicely, one sung by Dan and the other Matt and they give us the 1st real sense of what they actually sound like individually.

Confession.. The acoustic Matt does “Sorry about that”, I actually once sent a girl that knowing I would likely never be rumbled and claimed it was me! I know, shocking right! I wonder what Matt would think about it. I am ashamed of my behaviour but at the same time it’s quite funny that I actually pulled it off.

The 1st Alkaline Trio song I ever heard was “Nose Over Tail” and strangely enough it’s always been near the top of my favourites list. Make sure to check out “Clavicle”, “My Little Needle” & “Trouble Breathing”.

The bands second studio album. If Goddamnit brought us “Nose Over Tail” then this brought us the future classic “Radio”. Every band has a song they are known for and to me & many Trio fans “Radio” is that song.

Definitely up there in my top 3 Trio albums. Be sure to check out the title track “Maybe I’ll Catch Fire” as well as “You’ve Got So Far To Go”.

This was Alkaline Trio’s third & breakthrough album which got them mainstream exposure. It was a lot more produced sound wise than previous albums. The album charted but only just! If it wasn’t for the exposure “Stupid Kid” and “Private Eye” got on MTV I don’t think Alkaline Trio would have got that mainstream break at all with this one.

It has a special place in that it was the Album that finally got me into them but upon hearing their earlier albums I was surprised by how much better I thought those were.
This is a more polished sound & I really liked the rawness of their earlier music.

This was the 1st Alkaline Trio album I bought and the 1st one I listened to by the band back in 2001. Be sure to check out “Private Eye”, “Armageddon” & “Bloodied Up”.

Key songs: All on Black, Emma, Blue in the Face

After the modest success of From here to the Infirmary, Alkaline Trio needed to produce the goods with this one if they were to continue riding the gust of mainstream wind they had just caught. I was excited about the release of this at the time, I didn’t know what to expect as on the surface it looked like they’d turned visually Gothic but I did expect better than the previous album (as you do).

Check out “Continental” & “Fatally Yours” and the 2 bonus tracks “Dead end Road” & “Old School Reasons”. The 2 bonus tracks really tip the scales on this album as they provide something for those hankering after their earlier sound.

By this point it was becoming pretty evident that Alkaline trio were heading away from their earlier sound they became known for. This album is overproduced sounding & full of songs which are of slower radio friendly tempo. The closest you get to anything faster is the song “Back to Hell”. To file this album under Punk or even Pop-Punk would be a huge exaggeration.

So while this album does appeal to a wider audience it’s somewhat life or death for those who cling onto their earlier music and many of the earlier fans had dropped off by this point. On this album also be sure to check out “Mercy Me”.

Key songs: Lost and Rendered, I Found Away

More towards the bottom of my favs pile with this one. The only redeeming songs for me are below. I’d go as far as to say this is their least memorable album. It’s worth giving the albums biggest song “Calling All Skeletons” a listen too.

The album was described as a return to the band’s punk rock roots. I don’t know about that but there are a few glimpses of old in there. Alkaline Trio recorded this in the same location as much of their early albums and used the same producer so perhaps this is partly what was meant by a return to their roots.

This album believe it or not is their highest-charting album, even topping a few of the specific billboard genre charts such as Alternative Rock & Rock Albums.

If anything I’d put this alongside Good Mourning. Be sure to check out “The American Scream” as well on this one.

Key songs: The Temptation of St. Anthony, One Last Dance, I, Pessimist

This isn’t a bad album really. The songs below are (in my view obviously) some of the best they’ve put out in several years. The Deluxe version contains 4 additional songs, 3 of which sung by Dan which evens things out a bit on the vocal front. One thing I noticed on this Album more than others was Derek’s intricate drumming (Not that it hasn’t always been there, I just noticed it a lot more here) which seems to have become more of a lead instrument rather than just a backdrop. People rarely notice the drummer much but you can’t help but notice here.

The song “The Temptation of St. Anthony” is about the most straight up rocking thing we’ve seen from the band in several years. While the song “One last Dance” is about the closest I’ve felt to their Queen of Pain era in years.

Alkaline Trio’s 9th studio album and 1st in 5 years is called “Is This Thing Cursed?”. Judging by the title there may be meaning behind that which we will no doubt discover later. From Interviews I’ve read this album is being described as a cousin or sibling to the Maybe I’ll Catch Fire album.

Having heard the album I can’t say I agree & would place this in terms of sound between Agony & Irony & Crimson despite it being a heavier album. While there’s a good dose of originality here a lot of it feels nostalgic. You get the what you would consider a typical trio album spread of song styles here. Dan sings lead on 5 songs, Matt the other 8.

For example the final chord of “I Can’t Believe” is a shout back to very early Alkaline Trio, it’s almost like it was put in there to tease us! The Chorus of “Blackbird” sounds like Skibba has been spending too much time around Mark Hoppus while the verses remind me of Sonic Youth’s “Stereo Sanctity“. Elsewhere “Sweet Vampires” has a familiarity about it that is reminiscent of “Hell Yes” & “I Found Away” & “Goodbye Fire Island” sees Matt doing backing vocals for himself.

My 2 picks from the album are below.

So that’s it for the best Alkaline Trio song picks? What about all their other good songs?! Songs which aren’t on their full lengths, B-Sides etc? I was aware of this problem before I started creating this and decided that it needed to be a separate list for the sake of keeping things orderly and uncomplicated. If you want to read more about the history of the band look here Wikipedia Article.