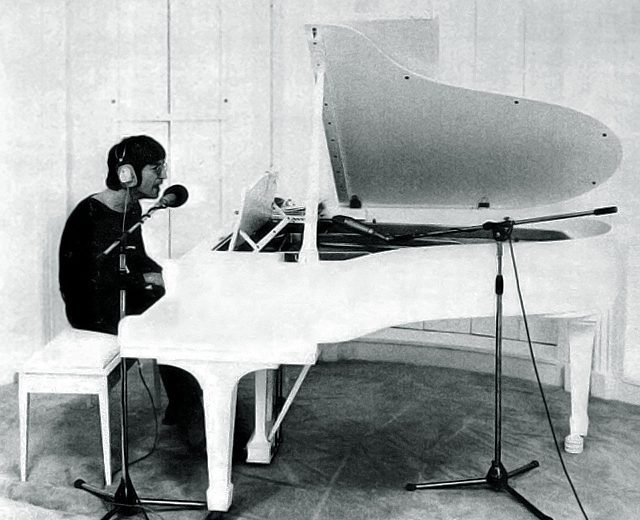 Today we’re taking a look at some of the best John Lennon covers of the classic song Imagine. The songs lyrics encourage you to imagine a world at peace without borders or the divisions of religion and nationality and the possibility that the whole of humanity would live unattached to material possessions.

Many artists have tried to cover this song over the years, some of the best voices in music have had a go at it which is a testament to the influence & impact the song had on these peoples careers.

Amongst some of the musicians/acts who have covered it to date are Chris Cornell, Eva Cassidy, A Perfect Circle, Pentatonix, Davina Michelle, Queen. Before we get to those, let’s remind ourselves what the original sounds like so you can better compare.

Album on Amazon | Apple Music
Lennon and Yoko Ono co-produced the song and album of the same name. The song was the best-selling single of his solo career & has re-entered the charts many times taking the number 1 spot on several occasions in various countries. It wasn’t till 2017 that his widow Yoko officially received co-writing credit.

Onto the Imagine covers. Each brings their musical genre/style & and their puts their own unique mark on it.

Album on Amazon | Apple Music
Famous for being the frontman of the band Soundgarden & Audioslave & later for his solo work. Chris Cornell had one of those unique voices that don’t come around all that often & he could try his hand at just about anything & make it unique & his own. Chris Cornell tragically died in 2017. This cover from his 2011 album songbook.

Album on Amazon | Apple Music
Eva Cassidy was virtually unknown at the time of her death from cancer aged 33 in 1996. Since then she has become a worldwide success. I think it’s safe to say this song was important to her when the album this song was recorded for was also called Imagine just like John Lennon’s album! The album was released 6 years after her death & became a number 1 selling album.

Album on Amazon | Apple Music
Alternative rock supergroup A Perfect Circle released this cover on an album of covers titled Emotive. Not as hopeful or optimistic sounding as Lennon’s version but instead delivered with a darker feel.

Album on Amazon | Apple Music
Famous for winning American singing TV Show The Sing-Off. The group won a recording contract but were later dropped but that didn’t stop them. They later found their home on Youtube having amassed over 3.7 billion views since 2012. Known for their vocal harmonies & covers of famous songs, they added their special touch to this cover of Imagine & emphasised some of the messages in the song. This cover features on their album PTX Vol. IV – Classics.

Album on Amazon | Apple Music
Rising Dutch singer and YouTuber who has been active for the last few years & uploads cover songs to her youtube channel each week. She has amassed over 60 million views in just a couple of years. She also won a 2019 Edison Award for “Best Newcomer”. Outstanding voice & she can sing pretty much anything.

Queen, Who hasn’t heard of Queen! This 2005 performance sees the remaining members Brian May, Roger Taylor and then new singer Paul Rodgers take turns to deliver the song. Brian takes the 1st verse, Rodger the 2nd & Paul the chorus & final verse. The man himself Freddie Mercury sang the song the night after John Lennon was murdered on 8th of December 1980 & you can find that here.

#6. Queen. Freddie Mercury held his voice back and sang Imagine the night after John Lennon was shot to death. It was a beautiful singing of the song. Queen+Paul Rodgers is my second favorite version of the song. Brian, Roger and Paul make me cry every time. (Lennon’s version is the best)