Today (and in the future), we’ll look at some of the best guitar players of all time. Lists like these are obviously subjective because there are so many amazing guitarists out there. I’ve included them alongside the bands they’re best known for. 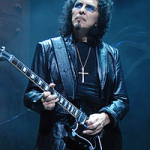 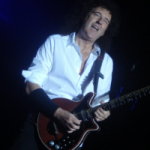 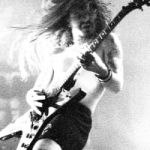 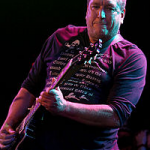 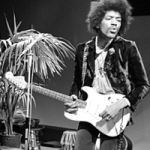 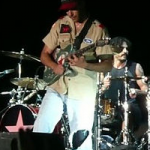 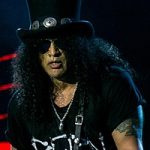 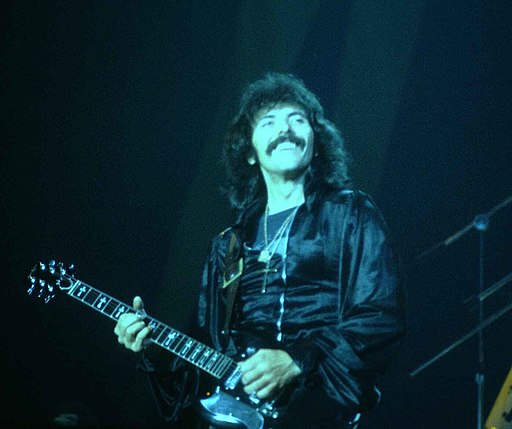 As a teenager, Iommi was working in a factory when he was injured by a sheet metal cutting machine. To make up for the loss, Iommi made two thimbles out of melted washing up liquid bottle plastic and leather to serve as fingertips. To help his DIY fingertips grip, he started with lighter strings and de-tuned his guitar half a step down.

Tony’s main band for nearly five decades was Black Sabbath. Tony Iommi’s unique playing style influenced 1000s of bands that followed. Black Sabbath was active from 1968 to 2006, then again from 2011 to 2017, and this year marks their 50th anniversary. Between 2016 and 2017, they embarked on a farewell tour.

Iommi plays Gibson SG’s and has had several custom built models over the years. The one he started out with was a 1960s red Gibson SG Special. The signature crosses on the fretboard started appearing around 1975 on a black John Birch SG Custom (Pictured).

In the 1st video below Tony talks about losing the ends of his fingers & how he overcame the problem so he could still play guitar. The 2nd video is of Black Sabbath’s classic song Paranoid.

Brian May is Queen’s long-serving guitarist (Spanning a 51 year career with them). The band has released 15 studio albums and has sold over 300 million copies worldwide. Freddie Mercury, the band’s lead singer, died in 1991 from AIDS complications. Brian and drummer Roger Taylor have continued to tour as Queen, with Paul Rodgers and then Adam Lambert as vocalists.

Brian is responsible for many famous guitar riffs. The solo in “Bohemian Rhapsody” & the solo in “We Will Rock You” are a few of the well known ones. Queen have been influential for many of the bands we all listen to. Some of those include Iron Maiden, Guns N’ Roses, Van Halen, Metallica, Red Hot Chili Peppers, Muse, Nirvana & Michael Jackson. 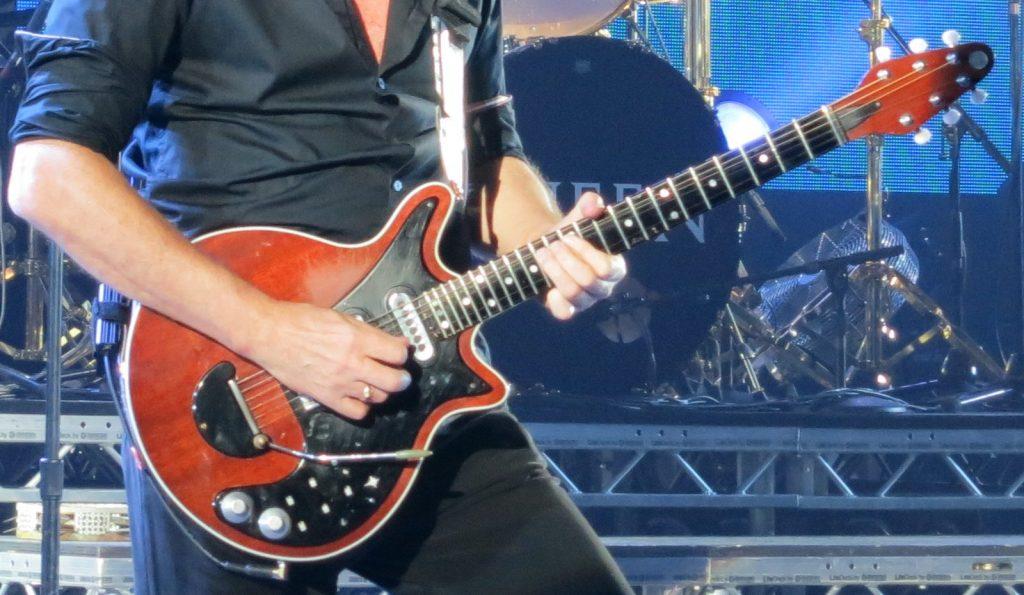 Brian’s Red Special (Pictured) is a guitar that was built by Brian when he was 17 & his father who was an electronics engineer. They had no experience in building guitars and no power tools. Little did they know at the time the guitar would be the basis for his entire life in music! The guitar features a separate switch for each pickup which was unique for the time and a sixpence is used for the logo on the headstock. As faithful to his longtime friend as he is his hairdo (One of those will outlive the other!). The Red Special has become as Iconic as Brian himself. Replicas have been made over the years for Brain as well as for mass production but in limited numbers. Currently Brian owns a company that sells guitars modelled after his famous Red Special.

In the 1st video below Brian talks about his famous Red Special and what went into creating it. The 2nd video is the song Headlong from the 1991 Queen album Innuendo. 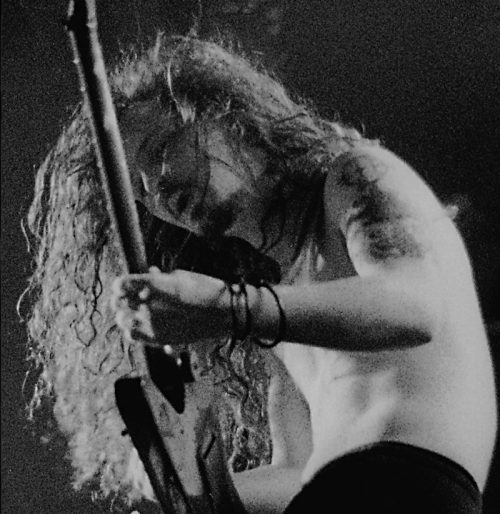 Darrell Lance Abbott aka “Dimebag” as he was known by the World was the lead guitarist of the band he formed with his brother in 1981 at the age of 15 called Pantera. On the surface Pantera seemed to come out of nowhere and have a short career at the top before imploding but in actual fact the band had been together almost 10 years when they achieved any level of success. Pantera would go on to become one of the biggest Heavy Metal bands in the World. Pantera’s 7th album 1994’s Far Beyond Driven shot straight to the number 1 spot of the US & Australia charts which was unusual for such a heavy band.

Things might have turned out better for Pantera if it hadn’t of been for the lead singers drug issues which eventually lead to the band imploding only 2 albums later. In 2003 after the breakup of Pantera Dimebag formed Damageplan with his brother on drums. Unfortunately things were about to take a turn for the worst. Dimebag was shot and killed by a gunman while on stage during a performance with Damageplan on December 8th, 2004. He was only 38 years old at the time.

Dimebag played mainly Dean Guitars during his adult years and used Randall amplifiers. Dimebag popularised the “Whammy Harmonic” technique, using the whammy bar to lower the pitch of the stings then using his left hand to create the harmonic he’d lift the whammy bar again to create a high pitched squeal. This was typically used at the end of solos or songs. Dimebag is frequently listed in the top 10 of many greatest guitarist lists and his popularity continues to grow 14 years later since his passing.

The 1st video is a collection of Dimebag playing various solos. The 2nd video is the guitar solo from the song Floods from the 1996 Pantera album The Great Southern Trendkill. 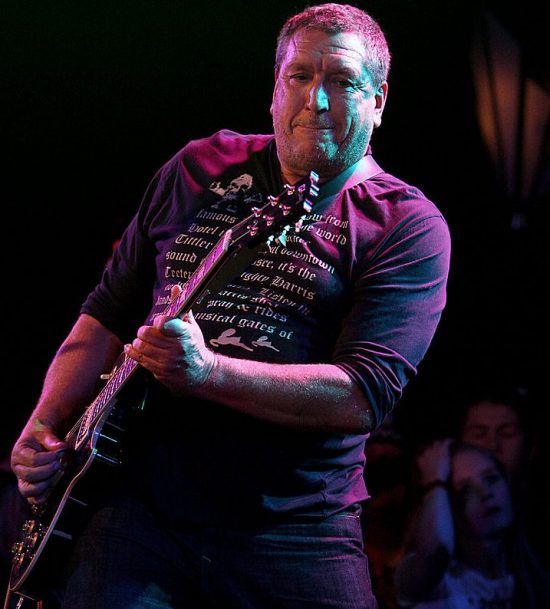 Steve Jones (Real name: Stephen Philip Jones). With a start in life like his you wouldn’t ever expect an outcome like this. His dad left when he was 2 years old, he was then abused by his step father. As a teen he amassed 14 criminal convictions and spent a year in a remand center. Forming the Sex Pistols with friend and Drummer Paul Cook saved him from a life of crime. Writing most of the riffs for what would become the most iconic punk album of all time “Never Mind the Bollocks, (Released 1977)” in his bedroom having only been playing guitar a very short time, Steve Jones has done well for himself.

After the Sex Pistols split up after 3 short years Jones went on to form The Professionals with the Drummer Paul Cook. Drug issues got in the way and hampered the bands progress and they were done by 1982. Jones spiraled into a life of drug addiction for several years and off the musical radar. Resilient as he is, he overcame that putting out 2 solo albums in the late 80s & forming Neurotic Outsiders with Guns n Roses bassist Duff Mckagan & Drummer Matt Sorum & Duran Duran bassist John Taylor in the mid 90s. A successful Sex Pistols reunion followed.

Since 2004 Jones has been hosting his own radio show called “Jonesy’s Jukebox” and interviews many famous faces on there.

The 1st video below Steve shows us how to play some of the Classic riffs from the Sex Pistols 1977 album Never Mind the Bollocks. The 2nd video is a live performance of the song Pretty Vacant which is also from the same album. 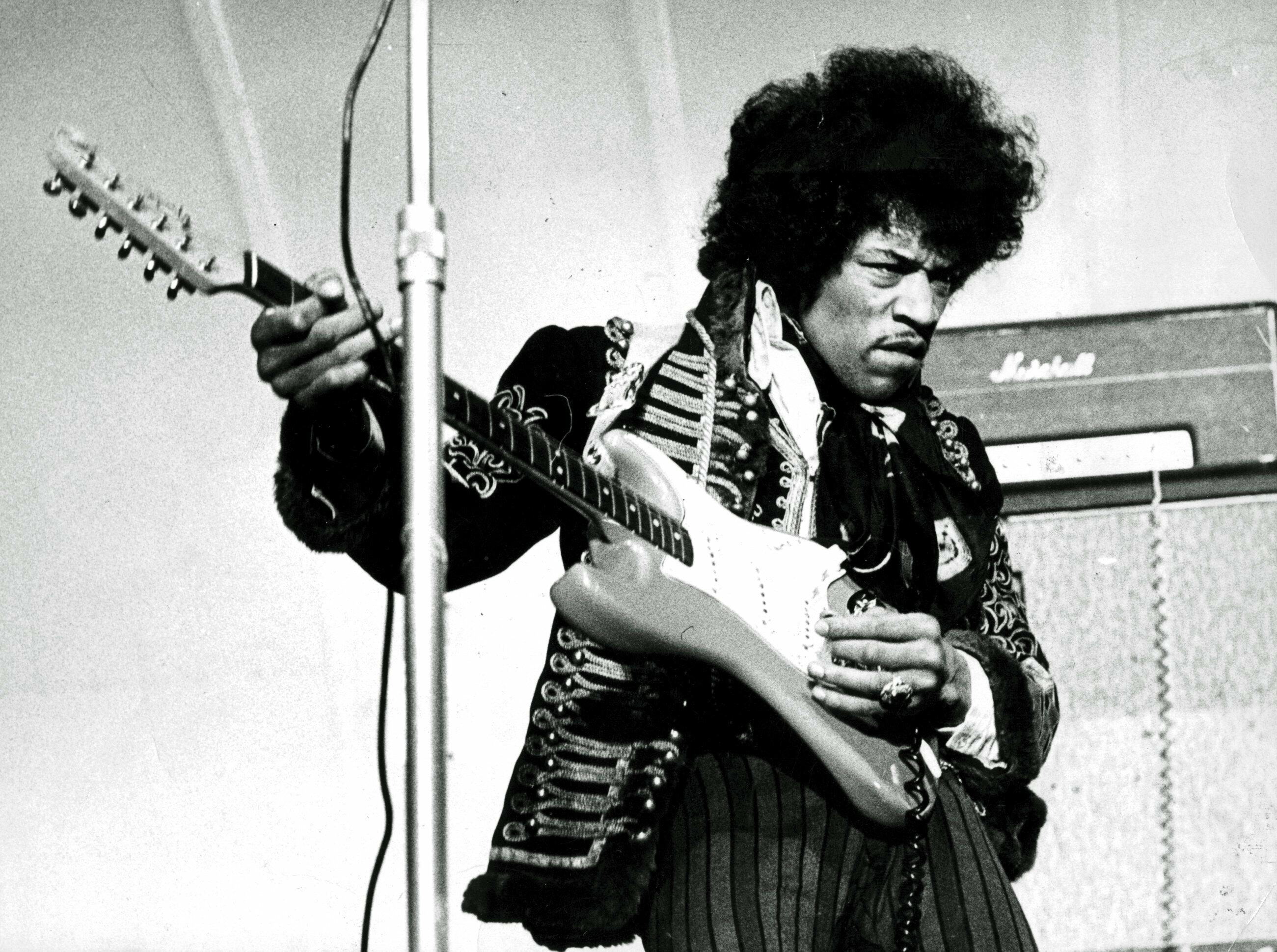 Jimi Hendrix, born Johnny Allen Hendrix was born in 1942 and in his very short life of 27 years left behind a legacy that is bigger than any other guitarist in history. He was left handed but played right handed guitars strung backwards because left handed guitars were hard to come by at the time. In a short 3 & a half years Jimi took over the World to become the most influential electric guitarist around.

His use of the wah-wah pedal popularised the use of such effects and is present on one of the most famous opening riffs of all time on the song “Voodoo Child”. 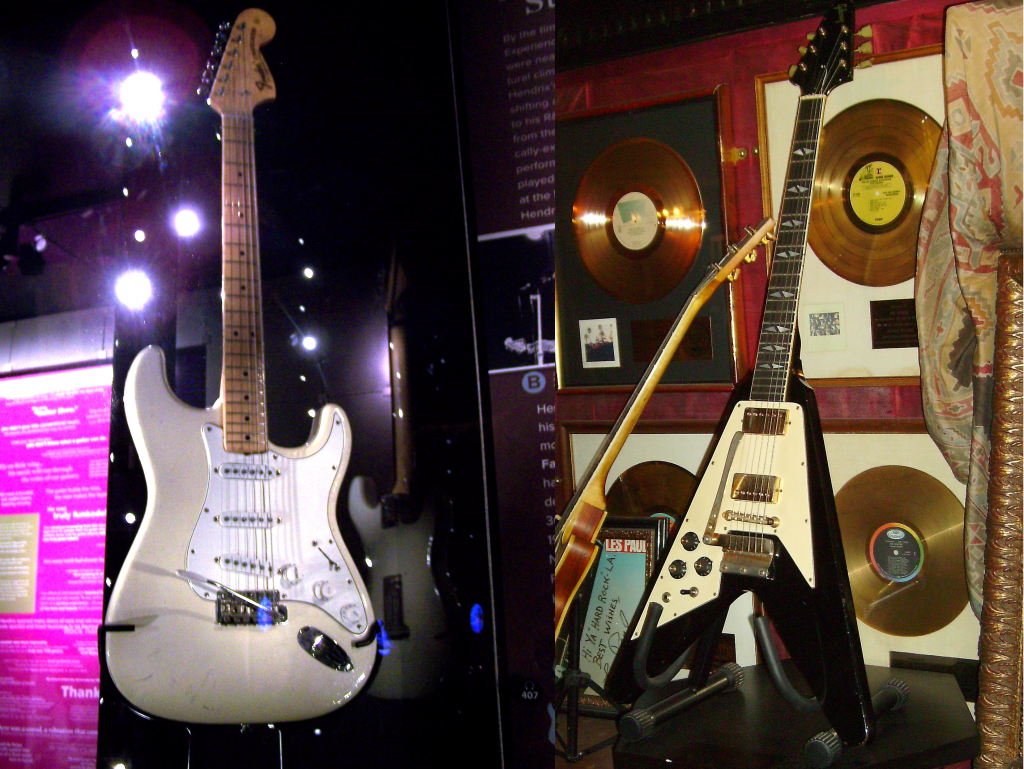 On the left is Hendrix’s White Fender Stratocaster, as seen most famously during the Woodstock festival in 1969. On the right is his custom made built to his exact specification Gibson Flying V. This was only in use for a short time before his untimely death. You can see this guitar in action during the Isle of White festival of 1970.

Jimi Hendrix died September 18, 1970 of asphyxia while intoxicated with barbiturates after apparently taking 18 times the recommended dosage of his girlfriends sleeping tablets.

The 1st video sees 6 questions being put to Jimi Hendrix. The 2nd video is of the classic Jimi Hendrix Experience song Foxy Lady.

Tom Morello – Rage Against The Machine 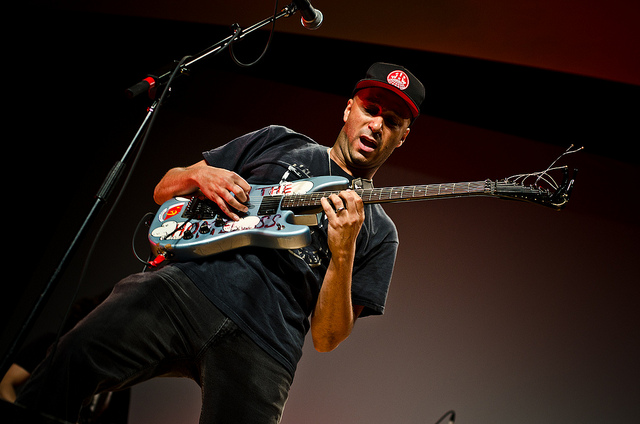 Tom Morello, born Thomas Baptist Morello was born in 1964 and is best known as the guitarist for Rage Against the Machine as well as Audioslave. The road to Worldwide success and becoming one of the most influential guitarists today started with him picking up the guitar at age 13 and forming a Led Zeppelin cover band. His guitar sound is heavily effects based and some of his most famous riffs contain guitar solos that mimic DJ scratching and sirens.

In 1991, Tom formed Rage Against the Machine with vocalist Zack de la Rocha, bassist Tim Commerford and drummer Brad Wilk. Rage Against the Machine reigned from 1991 till October 2000 when they split for the 1st time. Following this he formed Audioslave which was an equally successful group between 2001 & 2007 with Chris Cornell of Soundgarden on vocals and RATM’s Tim Commerford and Brad Wilk. RATM then reformed between 2007–2011. Along with his main groups, since 2003 he has been performing a side solo gig as The Nightwatchman as an outlet for his political views. He can currently be found in the Supergroup Prophets of Rage with Tim Commerford and Brad Wilk.

As for influences, some of them include Run-D.M.C, Public Enemy, Alice Cooper, Led Zeppelin, and names Tony Iommi of Black Sabbath as one of his biggest influences. 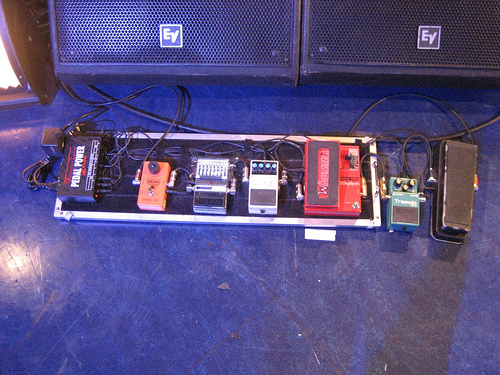 Morello uses mostly modified guitars from multiple makers, guitars he uses include: Mongrel Custom, Fender Stratocaster, Fender Telecaster, Ibanez, Gibson. He uses many effects pedals and the picture above shows the sort of pedal setup he was using during his Audioslave days.

The 1st video is of Tom Morello playing a few solos. The 2nd video is of the classic 1992 Rage Against the Machine song, Killing in the Name. 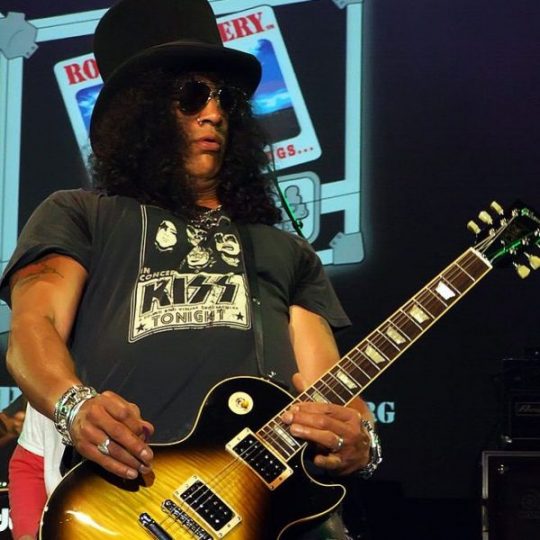 I bet you all would have bet your last dollar, pound or euro that you were going to see Saul Hudson on this list! Known mostly by his professional name Slash & as the guitarist for the rock band Guns N’ Roses. He is a British–American musician. Born born 23 July 1965 in London & raised in Staffordshire till the age of 5 before moving to Los Angeles.

Most famous for his iconic guitar work on Guns N’ Roses songs “Sweet Child O Mine”, “Paradise City”, & “November Rain” to name a few. Guns N’ Roses debut album “Appetite For Destruction” was released in 1987 & is one of the biggest selling debuts of all time. He has established himself as both a guitar legend & a former bad boy rocker who lived the life of Sex, Drugs & Rock N’ Roll excess & lived to tell the tale.

Slash quit Guns N’ Roses officially in 1996 & it would be almost 20 years till the majority of the original lineup reformed. Other bands Slash has been involved in include Slash’s Snakepit & Velvet Revolver during the late 90’s & 2000s. As well as that he has also worked with many famous artists including Michael Jackson where he played guitar on “Black Or White”. More recently he’s been working under the name “Slash featuring Myles Kennedy and The Conspirators” & has released 3 albums & is back touring with Guns N’ Roses.

Slash is known most famously for playing a Gibson Les Paul. While he does play them frequently his most famous work during the late 80’s & early 90’s was in fact recorded on a replica. This replica was a Kris Derrig built replica of a 1959 Les Paul & was largely responsible for Slash’s trademark tone. The image above is of the Gibson version of that replica. When playing live he does indeed use actual Gibson models.

In the 1st video below, Slash talks about his various guitars. The 2nd video is of the classic 1987 Guns N’ Roses song Sweet Child O’Mine from their Appetite for Destruction album.